How I Beat Hyposmia 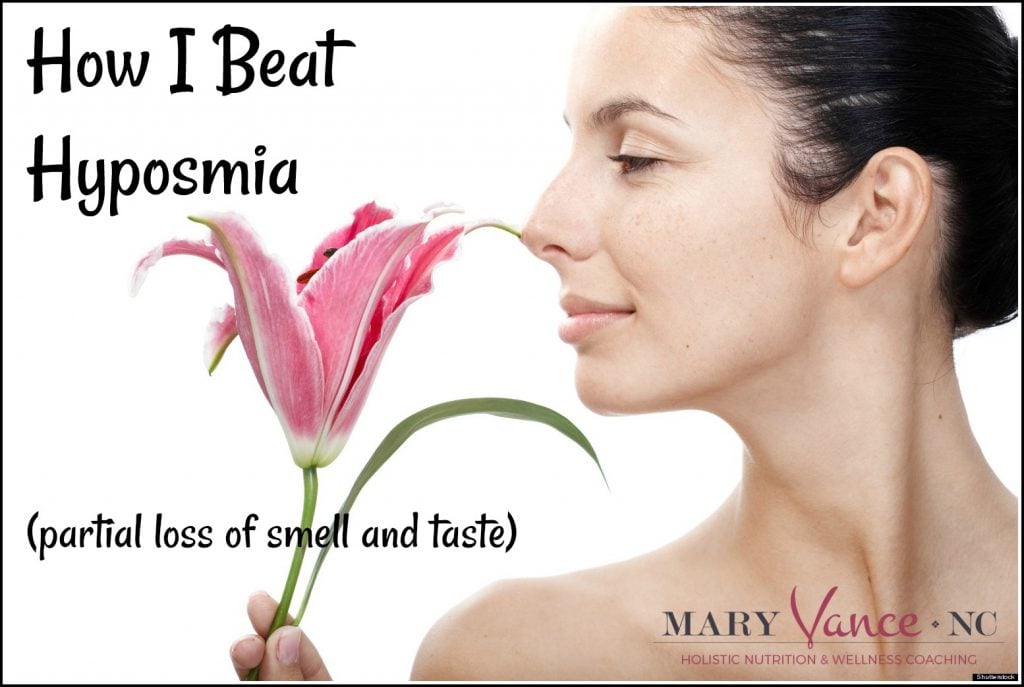 You probably don’t give a lot of thought to your olfactory senses day to day, but imagine suddenly losing your ability to taste and enjoy your food. To no longer be able to smell freshly cut grass, delicious cookies baking, or taste fresh blueberries. Smell and taste are senses we take for granted– until they’re gone. I’ve been through this devastating loss and was successfully able to overcome it.

I have spent hours researching how to overcome anosmia (the inability to taste or smell anything) and hyposmia (partial loss of taste and smell). There are few studies and no real cure. But I found a way to help my body heal after suffering from post-viral hyposmia for months. Now I want to share my experience with hyposmia and anosmia in hopes that it will help anyone out there looking to overcome these conditions.

Spring 2017 was a very stressful time for me. My mother had just died, and I found myself back and forth between California and Arizona taking care of her and then her estate. I was admittedly not taking very good care of myself at this time and came down with a bad cold (which I’m usually able to ward off with herbs and self care).The cold hit me pretty hard, and with my clogged sinuses I soon lost my ability to taste or smell anything, as sometimes happens when one gets a cold. I tried to push through it, but after a week I felt really bad and stayed in bed a few days. The cold lingered, and I slowly recovered, but I never recovered my sense of smell and taste. I waited patiently until about two weeks had passed and I realized I still couldn’t taste or smell anything– at all.

I contacted my naturopath, who assured me my senses would return. After a few more days, I was catching whiffs of things here and there, but I still couldn’t taste anything. After about a month of no improvement, I went to see an otolaryngologist. There I learned I had postviral hyposmia, the partial loss of taste or smell, caused by an upper respiratory infection where the virus had attacked and killed the olfactory nerves in my nose (who knew they were so delicate?). There was nothing else wrong, no nasal polyps or any other abnormalities. I was told these senses would likely return, probably not 100 percent, and maybe not at all. Damaged olfactory nerve cells can regenerate, but they don’t always reconnect properly in the brain. 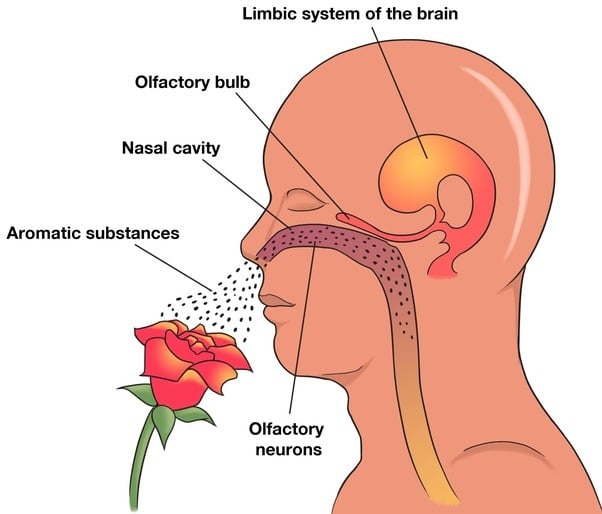 I was devastated but optimistic and immediately poured myself into research. I had never heard of this condition and didn’t even know it could happen. Turns out there isn’t much out there on anosmia or hyposmia and even less about how to treat it. There isn’t a cure. There have been very few studies on the prognosis of postviral olfactory dysfunction.

It may be underreported, but it’s thought that olfactory impairment affects approximately one-fifth of the general population, with the highest prevalence observed in older men, especially in individuals who suffer from degenerative diseases such as Parkinson’s disease, dementia, and Alzheimer’s disease (hyposmia and anosmia, when not viral in nature, are actually a harbinger of Alzheimer’s and dementia). Frighteningly enough, olfactory dysfunction predicts a 5 year mortality rate in older adults (source).

Apart from degenerative diseases, the most common causes of olfaction loss are the folllowing:

Postviral URI is probably the most common cause of olfactory dysfunction observed in ear, nose, and throat clinics (source).

I read story after story online about people who, like me, were totally fine until they got a cold that completely wiped out their ability to taste or smell. Most people, also like me, had no idea this could even happen. Medications such as steroids and antihistamines may be used to calm the inflammation, but nothing was a sure thing. The prognosis is grim: Full recovery rate is 31.7%, but 80 percent of people achieve some recovery within a year (source).

I learned quickly that hyposmia is a safety issue. I had lost the ability to determine if food was fresh by smelling it. I wasn’t able to smell gas that could signal a gas leak. When the dog got sprayed by a skunk, I had no idea until family alerted me that my house and dog reeked of skunk.

What followed was depression, not uncommon in hyposmia sufferers. I was no longer interested in food, nor did I want to cook for people, one of my main joys in life, since I couldn’t taste to correct flavors and seasonings. I spent a lot of time in bed.

Meantime, I also poured over as much info as I could on how to help my body heal. Could olfactory nerves regenerate? Yes, there is evidence they do. With that logic, I researched herbs and supplements to support nerve health and regrowth. I came across a couple studies weakly identifying gingko and alpha lipoic acid as supplements to help hyposmia. I was also doing a lot of immune support.

How I Beat Hyposmia

It took me about four months to regain 90 percent of my ability to taste and smell. The supplements definitely helped (I saw noticeable improvement quickly after starting the protocol), but many people spontaneously recover their senses within six months to a year.

Here’s what I did:
Note: do this protocol for 3-5 months, then reassess. Most herbs are not meant for longterm use and will stop working after a few months.

I noticed great results with acupuncture, but as mentioned, they only lasted for a limited time after the treatment. I did three treatments. I joked that I would eat everything I missed during those 24 hours. The first improvement I noticed after adding the supplements was in my ability to smell most things. Then I could taste the first bite of something but nothing after that (known as taste extinction).

I think the zinc made the biggest difference, followed by the lion’s mane. I noticed the biggest shift after I added zinc. It happened slowly; it’s not like I just woke up one morning and could taste everything. I started to notice after three months or so that I could taste more than just the first bite of something. But then I would regress and have what I called “flares” where I’d go days not being able to taste anything again.

After about four months (where I am today), I can pretty much taste and smell everything and no longer have the flares. Some smells are super distorted, which is very odd, and I can’t really smell certain things, like poop, at all anymore (which I guess is a good thing?). Although I’m not good as new, I’m elated to have recovered as much of my smell and taste as I have.

But most of all, this experience reminded me of the power in our body’s ability to heal if we provide it with the nutrients and boosts it needs. Hyposmia is such an unusual condition, but I discovered many people suffer with it, and there is a sad lack of info about how to treat it. I hope this post helps someone else out there.

I wanted to update you on my success after one year. I did the protocol for about 4 months and then stayed on zinc and ALA a bit longer. I still use Lion’s Mane occasionally, mostly for its aid in cognition! My sense of taste has been fully restored. Sometimes I think I can smell even better than I could before, BUT the smell of poop and urine are still distorted, oddly (though I can smell them). Everything else is normal. I still do get the phantom smoke smell occasionally but rarely. I remain pretty amazed that I had such success from this protocol. I’m very thankful and reminded that our bodies have an amazing capacity to heal when given the right tools.