From models with mustaches to promises that drinking four glasses a day will make you slim, milk has been literally crammed down our throats since birth. And just what is it with this white elixir that supposedly builds lean muscle mass and apparently turns you into a rock star? 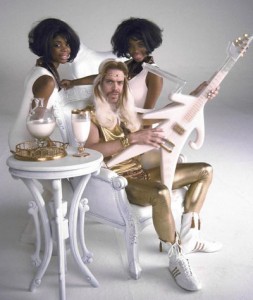 got milk? and groupies?

Milk is the ultimate comfort food, associated with nourishment, the first food that sustains us and kicks our immune system into gear with colostrum (proteins, immunoglobulins (antibodies), growth factors and anti-microbial agents passed from mother to child, a reason why breast feeding is so vitally important). But yuck, I hate the stuff. Always have. We were forced to drink milk in elementary school and I had to hold my nose to choke the stuff down.

But milk on the (legal) market isn’t the stuff that comes out of the cow: it’s been pasteurized, homogenized, and skimmed of fats leaving, well, an adulterated dead food. Pasteurization kills whatever bacteria might taint the milk, along with beneficial enzymes to help the body digest the milk. Skimming away the fat leaves a diluted product (not a whole food anymore); fat is what helps the body absorb fat-soluble nutrients A and the all-important D from the milk.

SO. If you like milk, I make a plea to try raw milk, which is unfortunately mostly illegal. You can buy it directly from the farmer, and then you can check out the conditions under which the cows are raised. Because, you know, it’s the dirty factory farms where the cows are crammed together and forced to eat grain (not their natural diets) where the most cases of e coli and other pathogens thrive and taint meats and dairy. Grass-fed milk has natural antibiotic properties that help protect it from pathogenic bacteria. Aside from what the cow is fed, how and where it’s raised and how the milk is collected play important roles in its safety and quality. Cows pastured on organic green grass produce milk with amazing health benefits. Only eight states allow raw milk to be sold in stores for human consumption — Arizona, California, Connecticut, Maine, Pennsylvania, South Carolina, New Mexico and Washington. In other states, milk can be purchased “underground” (illegally). Why should the government tell me what I can eat?

The debate is really heating up: Food safety experts, now solidly backed by the FDA and CDC, argue that raw milk should not be consumed because there is a high risk of contamination with a number of pathogens. But the truth is, The Centers for Disease Control and Prevention reports that, on average, there are 70 CASES of raw dairy food poisoning in the U.S. each year, a small fraction of the estimated 76 million annual cases of food-borne illnesses. This is a very low number, MUCH less than are actually sickened from pasteurized milk!

Raw milk is high in vitamins A and D, minerals like calcium, proteins like lactoferrin that help the body absorb and utilize iron, and enzymes. Even better, add cultures and ferment for kefir or yogurt, high in immune-boosting and digestion-enhancing probiotics. Or, buy raw cream and let sour at room temperature, covered with cheese cloth, to make your own sour cream.

Interestingly, those who are lactose intolerant may be able to enjoy raw milk because the enzymes that help the body digest the milk sugars have not been killed during pasteurization. When factory farming became a huge corporate agri-business, the need to irradiate meat and pasteurize dairy arose to offset the deplorable and dirty conditions on factory farms. Great! I’m eating shit-contaminated meat, but if it’s irradiated, the e coli in the shit I’m eating won’t kill me.

Recommended reading: The Revolution Will not be Microwaved, by Sandor Katz