Rethinking the Candida Diet: What’s the Best Diet for Candida? 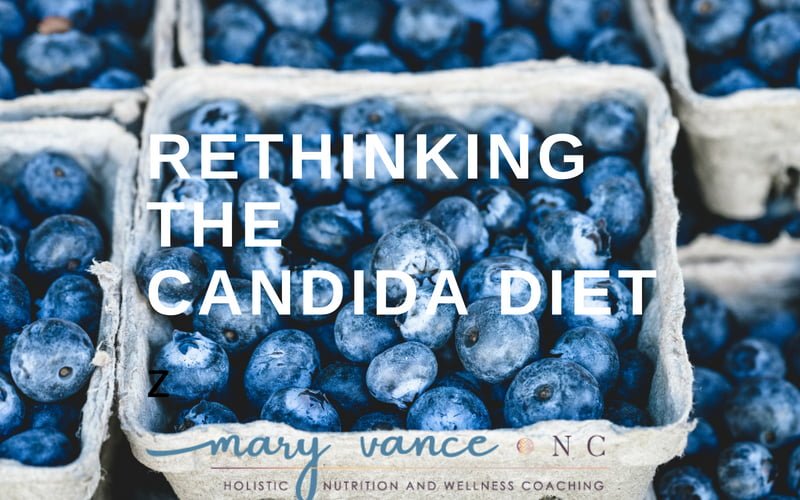 If you’ve done any research on the candida diet, you’ll come up with about 19 million results on google, most of which tell you to avoid sugar, white flour, certain condiments, dairy, and alcohol. Dig a little deeper and you’ll find other guidelines that tell you to entirely cut out starchy veggies and all fruits. Some of the diets recommend phases or even bone broth cleanses. There are millions (literally) of recommendations for the candida diet. But diet alone will not defeat candida.

And there are some major problems with the traditional candida diet. So what’s the best diet for candida?

Candida is a yeast that is present in your digestive tract, mouth, and on your skin. It’s normal when your immune system and beneficial bacteria keep it in check. There are 20+ types of candida, and candida albicans is the most common and the strain about which we hear the most. Everyone has candida in their bodies, and it’s not a bad thing. In fact, it exists in harmony with our beneficial bacteria and even strengthens the immune system under normal conditions. But when it begins to grow unchecked, symptoms result, and candida overgrowth can cause vaginal yeast infections, digestive issues, inflammation, leaky gut, and oral thrush. Read my other post for candida symptoms and more info.

Common causes of candida are

The most common causes I see are poor diet, birth control pills, and antibiotic use. Weakened immunity also contributes to chronic candidiasis, and candida weakens the immune system. Vicious cycle. Women most often notice chronic yeast infections or discharge, but candida also causes a number of digestive symptoms like bloating and belching.

What is the Candida Diet?

Candida needs moisture and sugar to thrive. The human body is a perfect substrate for candida growth, as it supplies both of these things. The idea behind the candida diet is that if you starve the yeast overgrowth by restricting its food supply, it will die. Easy, right? Well, in theory sure, but that’s not exactly how it works.

Here are the candida diet guidelines for foods to avoid:

Part of the confusion, I think, stems from the fact that there is no single diet that will be right for everyone. This is true in treating candida also. One person’s gut healing, candida killing diet is going to look different from another’s. But there are some inherent problems with the traditional candida diet, the least of which is that it’s very restrictive and difficult for people to stick to.

I should mention that before you embark on any diet or supplement protocol to treat whatever you think is the problem, TEST to make sure the problem is what you think it is! I run stool testing with my clients who have GI symptoms or issues. An interesting point to consider is many of these folks have self-diagnosed with candida when it’s not actually the main problem. They may have another fungal species and/or dysbiotic strains of bacteria that are causing yeast-like symptoms, which is why it’s so important to test. They’ll do the diet and herbs for weeks and weeks and may feel some improvement until they stop, then their symptoms return. They could have SIBO, SIFO, citrobacter (one that can also cause hefty GI issues), h pylori, or general dysbiosis. That’s why it’s so important to test and/or work with someone who can help you identify the problem.

That said, the traditional candida diet alone will not kill candida. You have to pair the diet with anti-microbial herbs to kill it effectively. Secondly, the candida diet does not address the underlying causes of why the yeast proliferated in the first place. This is why I see so many people with chronic, recurrent yeast. There are usually gut problems already present that allow candida to take hold and grow out of control, such as leaky gut, poor bacterial diversity in the gut (not enough of the good guys to keep the bad guys in check), estrogen dominance (feeds yeast), diabetes or high blood sugar, or other pathogenic or bacterial infections in the gut. These issues can be exacerbated by (or in some cases caused by) antibiotics, hormonal birth control, and the others I mentioned above.

One thing that I’ve noticed in my years of clinical practice is that time and time again, I’d hear that as soon as people go off their anti-candida diet and have one piece of fruit or anything with sugar, their symptoms would flare. These people would be religiously sticking to the traditional candida diet, and they’d done the anti-fungal protocols, but they weren’t kicking the yeast and they weren’t getting better. Why not?

Problems with the Candida Diet

1 The traditional candida diet does not heal the gut. My first point here is that the traditional anti-candida diet still allows grains. If you have a gut damaged by candida overgrowth or any other gut infection, your gut is inflamed, and grains are major irritants that will retard healing. Grains are polysaccharide starches that are difficult for a compromised small intestine to break down. This increases leaky gut and also injures the walls of the large intestine as food particles pass from the small intestine into the large intestine and become food for yeast and bacteria. Impaired digestion leads to bacterial overgrowth and worsens candida, which emit aldehydes (the same compound that’s produced when you drink alcohol) that further damage the gut, make it more permeable, and overwhelm the liver detox pathways. Potatoes are another polysaccharide starch. You need to avoid both in order to heal and seal the gut and improve the terrain so candida won’t flourish. (source, another source, yet another source).

2 It is impossible to eliminate all forms of sugar unless you subsist on meat and fat only. This one really bugs me. The main tenant of the candida diet is to remove sugar because that’s candida’s main fuel source. Starchy vegetables like carrots, beets, and potatoes are also eliminated because of their sugar content. But every single thing that is not a protein or a fat that you eat (carbs) breaks down into sugar eventually, so allowing any carbs in theory is faulty logic. All vegetables eventually break down into sugars. Grains break down into sugars! Yet grains are allowed, but fruit is not? Yes, you absolutely should avoid refined sugar, soda, and alcohol, because those sugars damage the gut. But you don’t need to remove vegetables like carrots, for example, that offer health and immune benefits. I should add, of course, that there if you have SIBO or SIFO, you may not be able to tolerate the higher FODMAP veggies like alliums, asparagus, artichoke, to name a few.

3 A very low carb diet can make people feel worse and potentially damage your metabolism. Many people feel great initially when they start an anti-candida diet because they’re avoiding processed foods, sugars, and junk. And that alone is a good thing. But removing all sugars or going too low carb by removing all grains and starches can slow thyroid hormone production and make you feel sluggish (and potentially cause hypothyroid symptoms). Additionally if you’ve removed all grains and all starches, you’re probably in ketosis, and there are studies that show that neutrophils, which are white blood cells, are less able to kill Candida when ketones are present. (source) So this idea of a zero carb diet to kill candida could backfire in some people.

What is the Best Diet for Candida?

The candida diet I recommend is a basic gut healing diet, similar to the specific carbohydrate diet:

This is a basic elimination diet. In my Candida MasterClass, I guide students through this elimination diet and teach them how to reintroduce foods to determine which foods are they can’t tolerate and that may be causing gut inflammation.

Again, these are GUIDELINES. I design a personalized diet for each and every person, and literally every candida diet I recommend to a client looks different. Sometimes I recommend a more low FODMAP direction; some people need to go more low carb/low sugar; others need to add in more carb. Some people can’t handle any fermented foods, probably due to the histamine, others may do fine with it. If you have an autoimmune condition, you may need to remove nightshades, nuts, seeds, eggs, and other potential gut irritants.

Most importantly, in order to get Candida overgrowth under control, it is critical to harmonize the inner ecology of the gut. You don’t need to wipe out candida entirely, but rather encourage balance between the good and bad bacteria with probiotic therapy and food. An anti-inflammatory diet is critical for this. Good bacteria living in the gut work in partnership with your immune system, keeping candida overgrowth in check. So after you take the herbs and knock out the overgrowth, it’s critical to finish healing the gut. This is one step people miss.

What have you found to be most successful in overcoming candida overgrowth?

Don’t forget to check out my training videos on the 3 secrets you need to know for kicking candida! 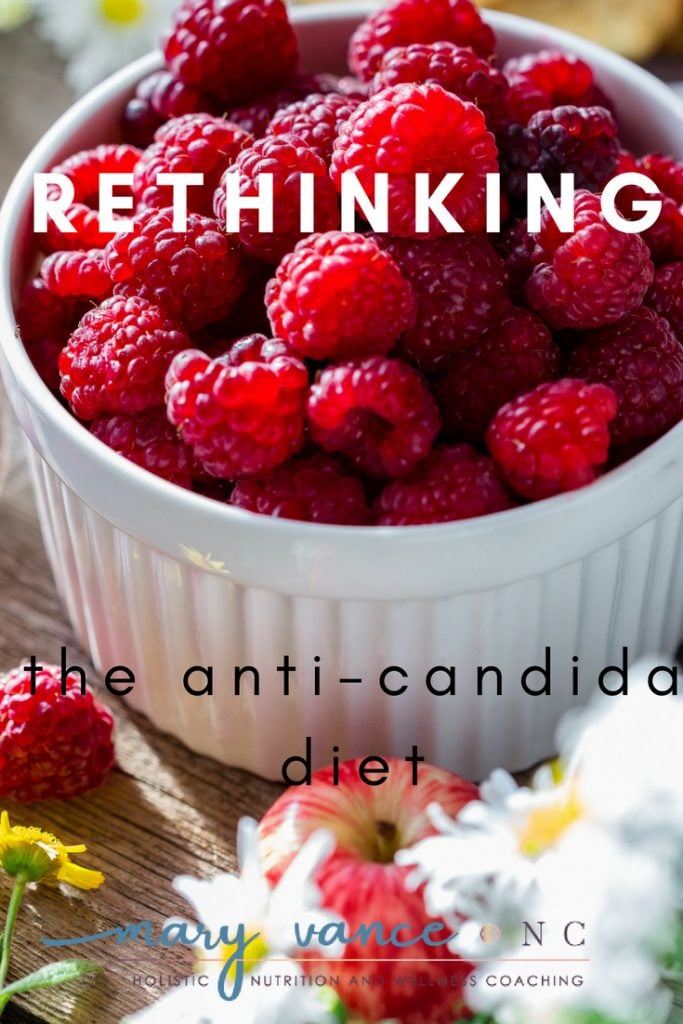 7 Foods to Ditch On A Candida Diet

How to Use a Ketogenic Diet for Your Health Goals

Four Types of Gut Dysbiosis and How to Resolve