What We Can Learn about Longevity from the Blue Zones 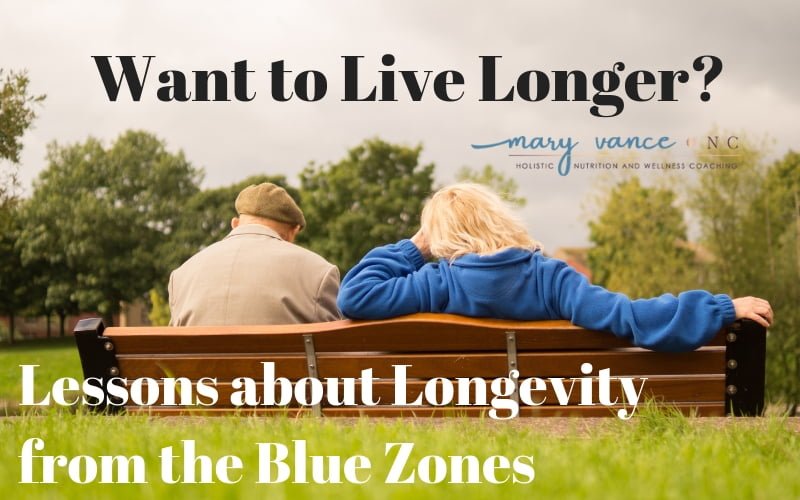 Longevity is big business. Everyone from Bulletproof Dave Asprey to Deepak Chopra claims to have the secret to living as long as you like, and that aging is optional. We humans are obsessed with slowing down the clock on aging and adding years to our lives. Serums, potions, supplements, even surgery have promised us that we have some control over the clock. But, “the brutal reality about aging is that it has only an accelerator pedal. The average American, by living a fast and furious lifestyle, pushes that accelerator too hard and too much.” (source)

The fact is, we can’t reverse the aging process. BUT we do have more control over how long we live–and how fast we age–than we think. Did you know that, for example, only five percent (estimate) of cancers are absolutely unpreventable? (source) That means our diet, lifestyle choices, and activity levels strongly influence our disease risk and how long we live.

We are not bound to our genetic risk factors; in fact, no matter what your genome says, the foods you eat, your stress level, and your lifestyle can change genetic expression of disease (epigenetics). Experts say that if we adopted the right lifestyle, we could add at least ten good years and suffer a fraction of the diseases that kill us prematurely.

With that in mind, researchers set out to discover what makes people live to 100. They discovered that the people who live in the Blue Zones — five regions in Europe, Latin America, Asia and the U.S.–  have the highest concentrations of centenarians (people who live to be 100 or over) in the world. The Blue Zones are places where people have a 3 times better chance of reaching 100 than Americans do. To qualify as a Blue Zone, these communities also have to be largely free of afflictions like heart disease, obesity, cancer and diabetes.

The Blue Zones include the following regions:

Here are the common characteristics of their diets: 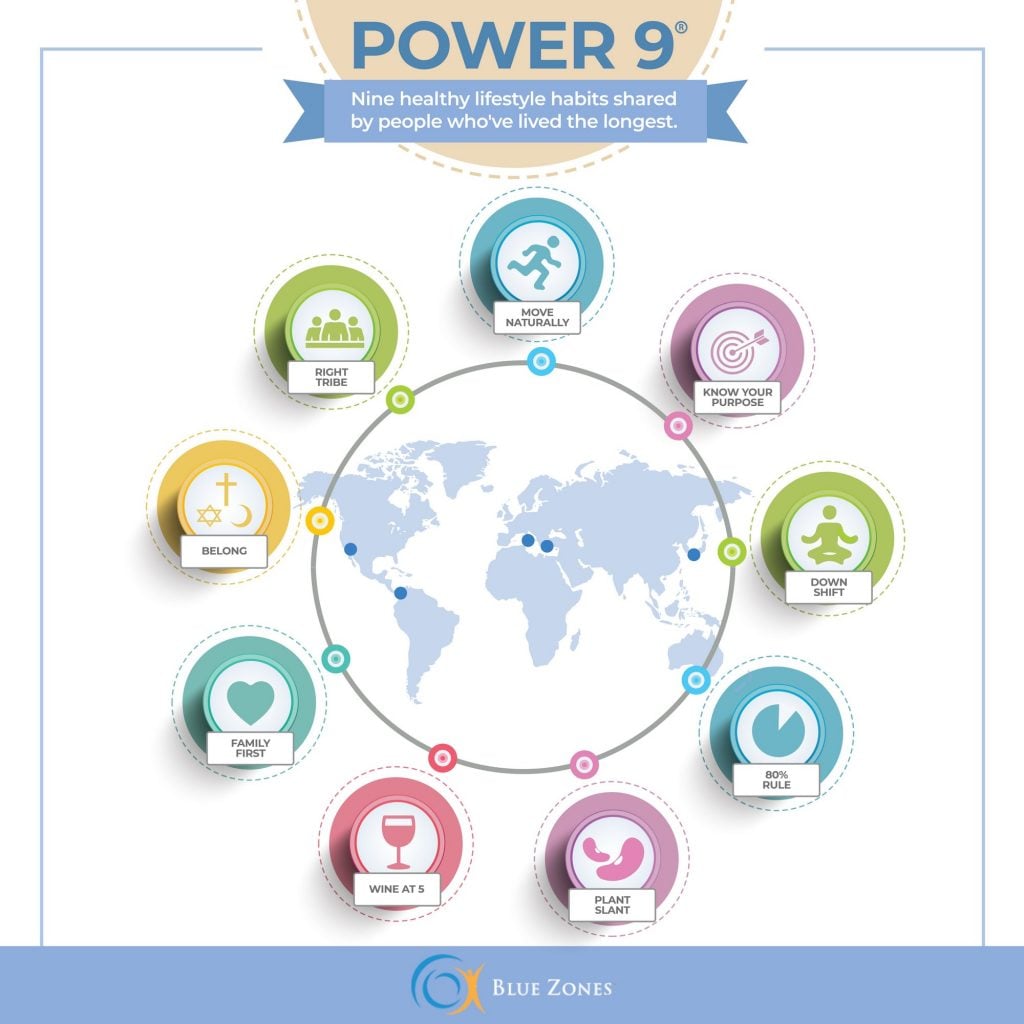 Blue Zoners not only live to be 100, but they also are free chronic degenerative diseases. Most curious to me was how much meat people in the Blue Zones are eating. I took a closer look.

The Seventh-day Adventists in Loma Linda are vegetarians. They don’t drink or smoke, and their diet is rich in legumes, whole grains, nuts, fruit, and vegetables. Their only sugar is derived from fruit. They’re also not allowed to watch TV, dance (?!), or use other “media distractions.” On average they’re living about 10 years longer than the rest of us.

BUT Another interesting key insight: Pesco-vegetarians (vegetarians that include seafood) in the community, who ate a plant-based diet with up to one serving of fish a day, lived longer than the vegan Adventists. Their top foods include avocados, salmon, nuts, beans, oatmeal, whole wheat bread and soy milk. (source)

Okinawans have one of the highest centenarian ratios in the world: About 6.5 in 10,000 people live to 100 (compare that with 1.73 in 10,000 in the U.S.). Okinawans have nurtured the practice of eating something from the land and the sea every day. Among their top longevity superfoods are bitter melons (great for reducing blood sugar levels), tofu, garlic, brown rice, green tea, and shiitake mushrooms.

In Italy, the researchers found that pastoralism, or shepherding livestock from the mountains to the plains, was most highly correlated with reaching 100. They’re eating a lot of goat’s milk and sheep’s cheese — some 15 pounds of cheese per year, on average. (source) Also, a moderate amount of carbs to go with it, like flat bread, sourdough bread and barley. And to balance those two food groups out, Sardinian centenarians also eat plenty of fennel, fava beans, chickpeas, tomatoes, almonds, milk thistle tea, and wine from Grenache grapes.

That’s an interesting paradox: They’re eating a lot of cheese and bread and drinking quite a bit of wine. But their dairy is likely unpasteurized; their bread non GMO and made without additives, and the wine produced without glyphosate. They’re also getting a lot of exercise into old age. Their main fat source is olive oil which contains a blood pressure lowering, anti-inflammatory compound called oleuropein.

So as you can see, the Blue Zoners are eating little–if any–meat, and when they do, it’s anti-inflammatory wild salmon and seafood over red meat.

Another common denominator among the Blue Zoners is a strong sense of community and social connectedness, whether it be from religion or shepherding. We know that family and community, a sense of being liked, makes people happy. The caveat to this of course is if your family stresses you out or if you have toxic relationships. That can actually be detrimental to health and longevity.

How You Can Adopt Principles of Longevity from the Blue Zones

Do you want to live to be 100? Even if you don’t live in sunny Loma Linda, beautiful Sardinia, or tropical Costa Rica, you can follow some basic dietary longevity guidelines:

The typical American is eating more processed food, is largely sedentary, is consuming too much (likely non organic) meat, cheese, soda, sugar, fast food, and too few veggies, and is possibly disconnected from family and community due to working too much. All these factors lead to degenerative disease. Our bodies are meant to move frequently, and we need a lot of plant-based foods for antioxidants and to nourish our gut flora.

Certainly there is no one size fits all when it comes to diet, but we can learn a lot about how to prevent disease with the Blue Zone guidelines.

Epilogue: I’ve been reading this book about longevity and fasting: The Longevity Diet: Discover the New Science Behind Stem Cell Activation and Regeneration to Slow Aging, Fight Disease, and Optimize Weight, and the research on longevity and diet is quite fascinating. Check it out here. 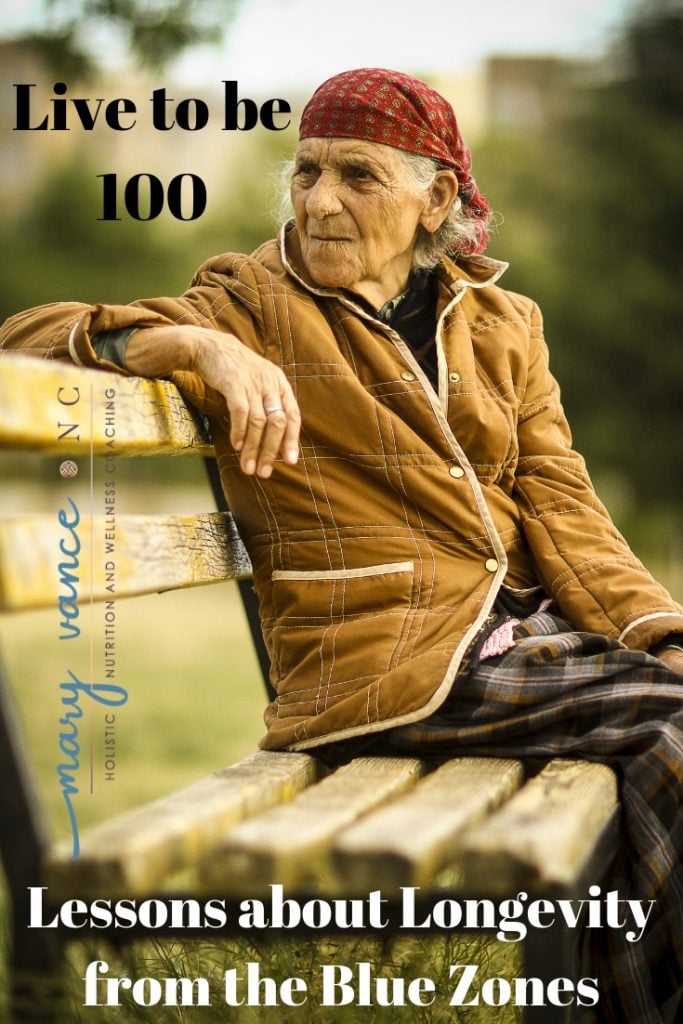 Should You Avoid Lectins for Better Health?