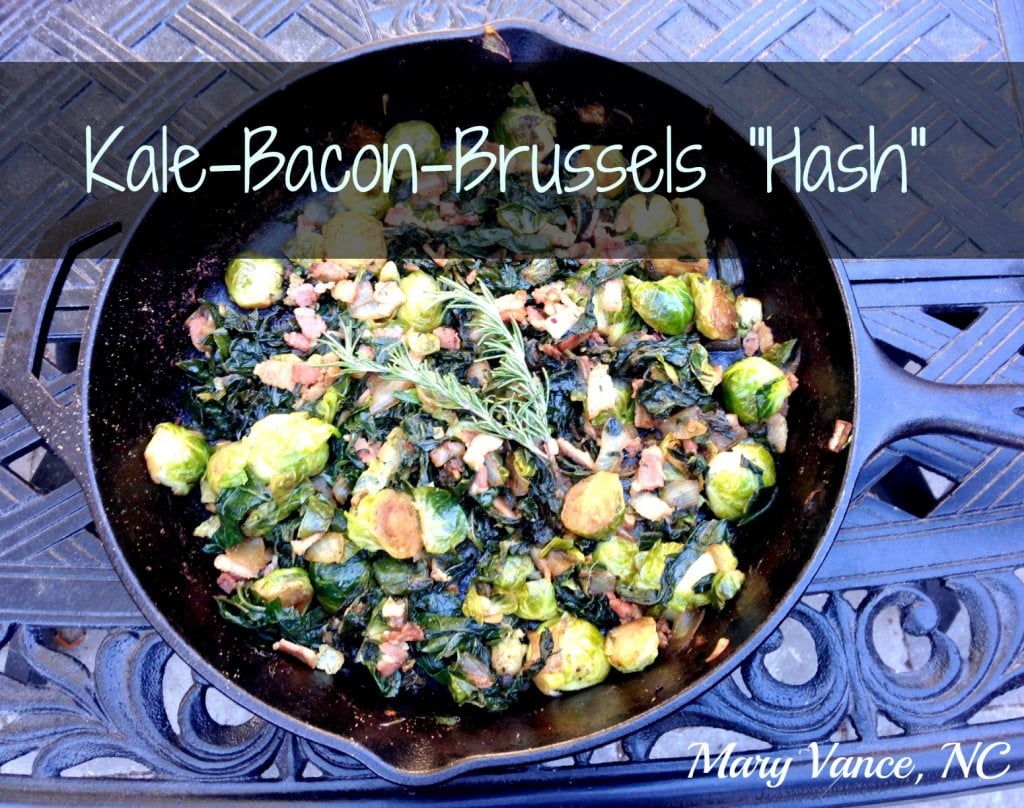 This kale bacon brussels sprouts “hash” is the perfect autumn side dish (Thanksgiving, anyone)? It is potato-less but substantial enough to be hash-like, and it is chock full of superfood cruciferous phytonutrients like vitamin K, vitamin C, minerals, and compounds that support liver detox pathways. Both Brussels sprouts and kale contain the phytochemical indole-3-carbinol which protects against cancer and detoxes excess estrogens to which we’re all exposed.

This dish is sure to convert even the heartiest kale or brussels sprouts hater. This is a 100 percent true statement, because I’ve made it a couple times for holidays dinners, and all the self-proclaimed kale haters loved it. There are (sadly) never leftovers, but it would taste even better the following day reheated.

If you want to make the dish vegetarian or if you’re punishing yourself with a bacon-free existence, you can easily leave bacon out and it will still be delicious. Make sure you choose organic, uncured bacon that is nitrite and nitrate free. I use thick cut. This dish pairs well with other Thanksgiving or holiday dishes: turkey, yams, cranberries. It can be easily doubled. Enjoy.

Cooking the bacon: Put the bacon strips in a large cast iron skillet that has been lightly coated with coconut oil. Cook it until the fat has rendered and the bacon has reached the crispiness you desire. Take the bacon out of the pan and leave the fat. Deglaze the pan with wine or chicken/vegetable broth.

Sautéing the vegetables: Coat pan with olive oil. Add the onion and garlic to the pan and cook on low heat until translucent. Toss in the Brussels sprouts halves and sauté for about 5 minutes, adding chicken broth as needed to prevent sticking and to soften them. Keep skillet covered to aid in softening. Add the kale. Throw in the thyme. Toss and cook the entire batch until the kale has wilted. Continue adding broth to prevent sticking, cover, and cook until flavors meld and veggies are soft. You could also add some balsamic vinegar for fun and depth of flavor. While everything is cooking and the bacon has cooled, chop it into bite-sized pieces.

Finishing the dish. Toss in the bacon pieces and stir. Season with salt and pepper to taste. Remove from heat. Garnish with rosemary sprig. Serve and delight your guests.